The opening of the heavy metal door assaulted my senses with familiar unpleasantries. Although the damp concrete floor appeared clean, the room smelled of ammonia, feces, and especially dirty, sick dogs. The cacophony of the eighty or so dogs was unrelenting. Some challenged their fellows with snarls, while others desperately sought my attention with sharp barks. Everywhere, four legged captives protested their imprisonment with howls, whines, growls, and whimpers.

None of this compared with the spectacle before my eyes. In this county dog pound in rural Ohio, stray dogs of every age, shape, and size found temporary shelter while they awaited their “forever home.” Sadly, for many, that home would not materialize. The overwhelming majority would receive only a pat on the head and an ample meal as they awaited the Green Mile of dogdom – their final walk to the back room of the shelter.

I made my way down the rows of chain link runs, pausing in front of each. In the first was a large, aged German shepherd. He sat in the back corner of his cage eyeing me wearily. I offered a soothing word, but he didn’t approach. This majestic, elderly animal was not adoptable, and his fate was a foregone conclusion. I moved on.

So it went. A middle aged Chihuahua huddled in the back of the cage shivering from the cold, fear, or both. Her bulging eyes were riddled with confusion. A skeletal Doberman pincher, teats hanging low from a recent litter. A border collie with a huge tumor.

Sixty dogs later, I was becoming discouraged. I did not want to leave this place without rescuing at least one dog, but, service dog candidates are rare finds. When I had almost given up, I approached cage 70. The inhabitant was a young adult black lab mix. Large and bone-thin, he wagged his tail good naturedly as I spoke to him. Out of the cage he was gentle and attentive.

I was certainly Seventy’s only hope. He’d been at the shelter a month, and had three strikes against him. First, he was not a cute puppy. Next, he was emaciated. Lastly, he was a “big black dog”. Big black dogs are the least likely to be chosen at a shelter. To the untrained eye, they all look alike. Many potential adopters are afraid of their large size and dark coloration. There is nothing distinctive enough to catch the eye of a visitor. To be a BBD is nearly a fatal curse.

Seventy looked at me expectantly and slowly lifted a front paw and placed it on the chain link door of his kennel. The intent was clear. The neglected, throwaway dog was asking me to please take him home. This pleading gesture was the excuse I needed. Seventy would go home with me. As I filled out the adoption papers, the dog warden, who was fond of Seventy, told me “He was waiting for YOU.” 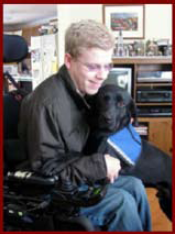 One year later, Seventy, now named Dozer, is in perfect health and has successfully completed training as a service dog for Sean, a young college student with Cerebral Palsy. Dozer and Sean are doing great. Dozer enjoys helping Sean in various ways, attending college, and going with Sean to work. Dozer finally has a loving master who appreciates him for the wonderful dog that he is.

I still recall the day Dozer and Sean met for the first time. Dozer immediately approached Sean and put his giant head in Sean’s lap, as though Dozer knew they were meant to be together. I leaned down and whispered in Dozer’s ear, “He was waiting for YOU.”

Buckeye Service Dogs provides privately trained service and therapy dogs. For more information, or to provide a volunteer foster home and participate in the initial training of a dog like Dozer, visit BuckeyeServiceDogs.com or email Christy Talbert (Christy@BuckeyeServiceDogs.com).

Currently accepting applications for the Winter 2023 Co-Train session which begins in February!  Please visit the Co-Train tab for additional information.